The influence of computing is felt daily and experienced on a personal, societal, and global level. Computer science, the discipline that makes the use of computers possible, has driven innovation in every industry and field of study. Computer Science as a discipline is often considered something completely separate from core subjects. But computer science education is focused on integrating these overlapping disciplines to create a more cohesive approach that allows concepts to be taught through real-world applications starting at the elementary level. These concepts are easier to master when students are exposed to them at a young age.

Let’s dive into what is programming vs coding and then how do those concepts create a baseline for computer science as a discipline.

Learning programming may seem like a huge task. There’s a lot to cover if you’re starting from zero, and some learners get overwhelmed because they don’t know where to start. But if we start with the basics, and learn one step at a time, it is not as overwhelming as you might think!

A computer is a hardware machine that can store and process information. The language of a computer is Binary, a complex set of ones and zeroes. Programming is essentially the larger-scale process of developing a complex machine program that acts according to our wishes.

Programming is the basic communication between human input and machine output. It is the way that a computer knows how and when to process data (information).

So, what is coding, then?

Below are 5 of the concepts that are shared across languages and are a core component of understanding how to code and implement ideas via computer science.

Algorithms are a step-by-step process to solve a problem. They are sets of rules that are followed by your program to complete certain operations or calculations. Think of this as a recipe.

An algorithm outlines a set of rules (the recipe) to get an expected output (the dish). Inputs are fed into the algorithm, and it implements various functions (tasks) to obtain that expected output. You can either use pre-existing algorithms or write your own.

Implemented on a Computer: Algorithms can be used to search or sort data

Variables allow you to store information that can be accessed over and over again. These are similar to variables in algebra. But in programming, we name our variables according to the syntax of that language. Naming a variable is called declaring a variable.

Applied to Real Life: Cooking, feeding the dog, login & passwords, your outfit for the day,

Conditional Statements allow us to perform certain actions depending on a condition.

Implemented on a Computer: If we want to tell the computer, “if this thing is true, do this other thing”, a conditional statement is used. See the following example where the variable animal is defined as dog :

Loops are used to repeat code. You can use a loop to repeat the same block of code over and over again.

Applied to Real Life: Creating Your Own Dance, Hula Hoop,

Implemented on a Computer: An example of a loop is the for loop. The for loop basically states “for every item in the list, do this thing”. The loop will end once it completes its predetermined length if one is specified. See an example using the programming language Python:

Functions are like actions or commands. These blocks of code only run when they are called, and you can set parameters into a function to return specific data. Think of the contacts button on your phone, the contacts list serves as a function, the numbers are executed when you select and call. Once you define your function, you can use it to implement actions.

Applied to Real Life: Chorus in a song, contacts in your phone

Now you have all the basics down, and you are familiar with the need-to-know terms, you can begin to explore more about the world of programming and computer science. Computer science is a reflection of our everyday lives using the power of computers to implement ideas. We use algorithms, variables, conditional statements, loops, and functions in our everyday lives and programming takes those actions and makes them so a computer can understand. Take the challenge and see if you can recognize where you see one of these concepts in your daily activities and then see how it is used when you are on a technological device, a whole new world opens! 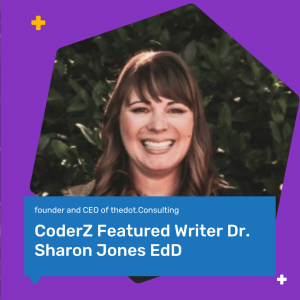 Dr. Sharon Jones, Ed.D is the founder and CEO of thedot.Consulting and the Dottie Rose Foundation, where she creates, innovates, and implements cutting-edge technology focused on new-age education. Dr. Jones is a highly sought after and national award-winning Computer Science educator in the public school system as well as a Sr. Technical Trainer at Central Piedmont Community College. Dr. Jones has presented and published nationally and internationally on data analytics, educational practices, and technology. Her book ARecipe for Success Using SAS University: How to Plan Your First Analytics Project is being used in curriculum and classrooms around the country. When not running the technology world, Dr. Jones spends her time with her husband Ricky, and two sons, Ethan and Dylan, and their beloved dog, Cooper.