The third annual Cyber Robotics Coding Competition (CRCC) will kick off registration for its fall 2019 national competition at the upcoming 2019 ISTE Conference & Expo, being held June 23-26 in Philadelphia. The CRCC is the first-of-its-kind, online coding and robotics tournament for students in grades 5-8 that enables schools, districts, after-school programs and clubs to engage students in STEM learning by using game-based competitions that are both safe and fun. Neither teachers or students need prior coding or robotics knowledge.

Educators interested in signing their teams up for this year’s CRCC can stop by the CoderZ booth #1962 to obtain registration materials.

The first eight-week virtual coding competition was held in New Hampshire at the end of 2017 and gave rise to an international phenomenon that has resulted in more than 100,000 students all over the world participating in similar events. In 2018, more than 45,000 students (47 percent of whom were girls) from U.S. schools in 23 states took part.

“CRCC reaches more students, of all genders, of all levels and from all educational paths and involves them in a fun and engaging online competition where everyone wins,” said Ido Yerushalmi, CEO of CoderZ, the competition sponsor. “All students need is a laptop or Chromebook with the latest Chrome browser, 4GB of RAM and Internet access, so CRCC eliminates physical and cost barriers to participation.” 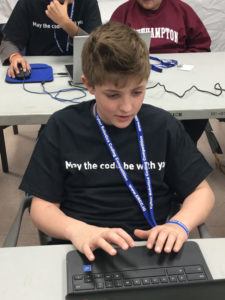 CRCC, which is organized by the Intelitek STEM and CTE Education Foundation, will once again be sponsored by CoderZ and Intelitek. The CRCC consists of four components, the first of which is a professional development webinar for participating educators. The second component is a two-week boot camp, which features a virtual, highly-scaffolded “sandbox” where students and educators begin learning about coding and robotics on the competition platform. Next, students will move on to the qualifiers phases during which students will compete to earn points for their teams. The fourth and final component will be the finals during which teams of students will represent their schools as they take part in in-person regional events.

Just like last year, students will compete on the award-winning CoderZ, Cyber Robotics Learning Environment, a cloud-based platform featuring a graphical simulation of LEGO Mindstorms EV3 robots. The innovative, online platform has a coding interface where users can activate a virtual robot, or “cyber-robot,” and watch the results in a real-time simulation.

Teachers and schools can sign up to join the event any time before October 7, which is the start date for the boot camps. Educators who sign up now will receive email confirmation followed by detailed registration information to set up their accounts and teams to get ready to compete.

For more information on the competitions go to https://gocoderz.com/ or contact Graham Celine at gceline@iscefoundation.org

CoderZ is an innovative and engaging online learning environment. Developed for students in grades 5 and above, the gamified STEM solution allows student to work at their own pace, easily programing real and virtual robots from anywhere in the world. The platform enables student to acquire computational thinking, problem solving skills and learn coding as a life skill all via a flexible and scalable virtual solution. For more information go to www.gocoderz.com